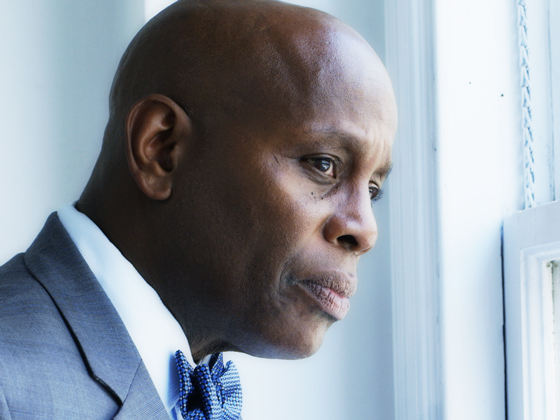 Abe is compassionate and selfless, a psychologist by training and an exceptional with a potent mental ability: he can block telepathy. It’s because of his unusual power that, as a boy in Nigeria, a man with telepathy found Abe to be a threat and killed his mother for trying to protect him. But Abe’s power has its advantages; working alongside Dr. Daniel Trent, his ability allows them to identify those who may be exceptionals so they can get help from Dr. Morris. After a massacre occurs at Dr. Morris’ facility in Omaha, Altruistic Abe hits the road to save unknowing patients who may be targets of an assassin.

Exceptional Ability: concurrent, proximal (short-range), suppressive telepathy. He can block or cancel out mental telepathy when used on him or others around him.

From the Ogun state in Southwest Nigeria and ethnically Yoruba, Adebayo Rotimi, found out at an early age that he could block telepathy. He would have likely never known he had this ability were it not for a chance meeting with a local crime boss who could read minds. Realizing he was in danger, his mother sent him to Sudan to be raised by distant relatives. Not content to let Abe escape, the telepathic crime boss tortured and killed Abe’s mother to find him, but she never revealed Abe’s whereabouts.

From Sudan, Abe eventually migrated to Egypt and obtained an advanced degree in Psychology there before coming across Dr. Morris while attempting to research his own mental ability. He and Dr. Morris became good friends and Dr. Morris hired Abe to consult with him as he studied people with exceptional abilities.

Abe’s own mental ability has been very useful when studying other exceptionals with mental abilities. In addition to being able to protect himself and other doctors and researchers from harmful or invasive mental powers, he is also able to help patients with uncontrolled mental abilities learn how to control them.

Abe has been called upon by Dr. Morris, with Dr. Daniel Trent, to locate those he believes have exceptional abilities. Their task is to interview possible exceptionals and, if they determine they have actual abilities, refer them to Dr. Morris and his team to obtain treatment and therapy.

When dealing with English speakers, he goes by the name Abe, a nickname for which he is fond. He speaks English fluently, although he has a trace of a Nigerian (Yoruba language) accent.

Abe has a strong sense of justice, a belief in the ultimate goodness of people, and a desire to help those who are in need or who are being oppressed. When working with Daniel, a large part of Abe’s motivation is helping exceptionals and ensuring they will be safe. This motivation comes into conflict with Daniel’s interest, which is at first scientific curiosity, but later finding a way to protect the general public from exceptionals.

Abe has concurrent, proximal (short-range), suppressive telepathy. As with the typical beta wave-based telepaths, Abe’s ability is very different — in fact, the opposite. He cannot read minds, however he can sense when a telepath is attempting to use telepathy around him and he can actively block telepathic activity in himself and a small area around himself. To do this, his brain produces telepathic waves that are 180 degrees out of phase with typical telepathic brain waves. His telepathy is primarily beta wave-based, but he has some ability in the gamma wave range. He is unable to suppress delta waves.

He has been extensively studied by us and is an indispensable member of our research team. He has a Morris telepathic power rank value of medium.