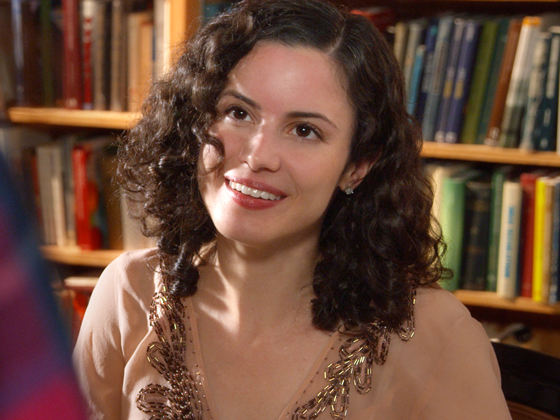 Though often troubled by her ability to see the future, Brynn has a Pollyanna view of the world. She’s caring, honest and open, and uses her power for good: saving a drowning child, and warning her friend about a dangerous bus ride, for instance. But when her visions lead her to India, she gets kidnapped and entangled in a conspiracy that puts her at odds with Homeland Security. As her life comes under relentless scrutiny and her loved ones become endangered, Brynn becomes less trusting and goes into hiding. She also learns to use her power to her own advantage to become very wealthy.

Exceptional Ability: Precognitive clairvoyance. She can see through the eyes of others or herself at a future point in time.

Brynn was raised by very conservative and religious parents. Brynn was actively involved in school band and theater and, as she got older, these school pursuits began to dominate her time and often kept her away from church. Her parents didn’t question it because it meant she had little time for boys, too.

Upon turning 18, Brynn moved out on her own to take college classes and take part in a culture that she was unfamiliar. She immediately fell in love with Portland and quickly made friends. Even then, she could feel the division with her parents growing as her beliefs changed.

In her mid-20s, Brynn struck up a friendship with a woman named Gabriella who was close to her age. Gabriella was very much Brynn’s opposite in temperament; Gabriella was very out-going and flamboyant, whereas Brynn was cautious and subdued. Gabriella was also a risk-taker and willing to take risks with drugs and her health, too. Their friendship slowly turned into a romantic relationship that left Brynn conflicted. Brynn’s parents would not approve of this relationship, and Brynn had nagging guilt due to the traditional values she was raised to believe in. Ultimately, the guilt caused Brynn to end the relationship with Gabriella, which left Gabriella devastated.

When Brynn was 24, she had the first vision she could remember. It occurred as she was having a migraine headache while she was sleeping. She dreamed of Gabriella overdosing on drugs and dying. Brynn woke up abruptly from the dream feeling nauseous, dizzy and with a severe headache. Brynn was deeply disturbed by the dream and decided to reach out to Gabriella, who was fine. Brynn brushed it off as a silly dream.

Because Brynn reached out to Gabriella, this rekindled their relationship in a strong, passionate way, but once again, Brynn severed her ties to Gabriella a few months later. It was after this break-up that Gabriella overdosed on drugs and died.

Gabriella’s death caused Brynn to become obsessive. Brynn learned everything she could about the cause, the means, and the location of Gabriella’s death. Everything she read and heard matched the vision she had a few months earlier. Then she had another vision – about a friend in South Korea and a bus exploding. Then she had another about a neighbor’s cat caught in a tree. The visions came more regularly and always in her sleep and always with migraine headaches. The visions were very distorted and difficult to interpret, but they always came true.

Then Brynn had a dream of a drowning child and saw herself rescuing him. She roped her best friend, Lauren Canella, into helping her rescue the child and found herself on the news and a minor local celebrity in the process, although she was cautious not to tell anyone but Lauren that it was due to a vision.

After the rescue, Lauren talked Brynn into telling the world she can see the future, which Brynne was not interested in at first. But to make extra money and to document her visions more completely, she decided to throw caution to the wind and write a memoir which she called Future Certain due to the fact that the visions always came true and she wasn’t able to alter them, whether good or bad. She dedicated the book to Gabriella and it was published by a New Age oriented publishing house.

Future Certain had very low sales in niche markets, most of the sales were to those who had existing interest in New Age topics and a predisposition to believe something the general public regards as fiction. The book, however, did get the attention of Radha Misra, who believed in Brynn’s visions.

Brynn has a strong moral and ethical outlook — she’s concerned for others and wants to protect her friends. She also wants to protect strangers she knows are innocent and whom she has seen only in visions. Her morality (and naivety) causes her to suffer prolonged interrogation both at the hands of Radha and Homeland Security. Lauren provides frequent moral and psychological support to her as Brynn faces pressure from foreign, organized criminals and Homeland Security. Like many telepaths, Brynn possesses an unusually strong willpower.

Though not a patient of mine, a colleague brought up Brynn Harris and her book. Based on her description of her ability, it’s very probable she has precognitive clairvoyance. This is a distal (long-range) form of telepathy that generates in the occipital and temporal regions of the brain. It is delta wave-based and accompanied by severe migraines and only occurs during sleep. Clairvoyance is an observational form of telepathy: she can see and hear what other people are seeing and hearing. Brynn’s clairvoyance is only precognitive and does not appear to operate in present time.

As with the other subject we studied years ago who also has precognitive clairvoyance, I developed a theory to explain this ability after scanning the subject and determining he had a Grade I brain tumor with unusual properties which resided in the occipital region of his brain. The tumor appeared to become more active when exposed to ionizing radiation, rather than being harmed by it. The subject also noted that visions became more frequent and clear when the tumor was exposed to radiation. This led us and other researchers to posit that the brain tumor was, in essence, a radiation receiver and may be able to receive temporal radiation and temporal particles. There is no effective means of testing this theory since temporal or tachyon particles are themselves theoretical and not currently measurable. This theory was widely debated and disputed by colleagues, but no alternate theories were proposed.

Brynn, like the other subject, would likely have a Morris telepathic power rank value of medium.