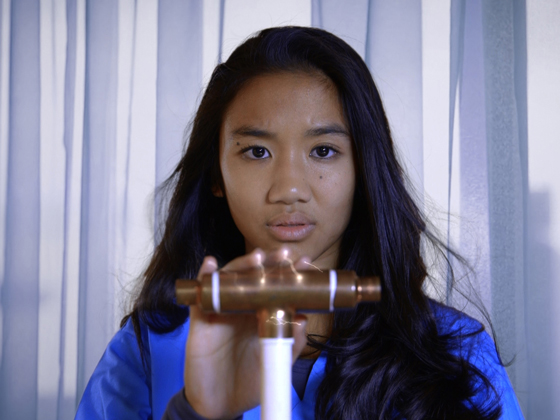 Born in Indonesia, her parents soon moved to the United States after her father found employment there and based on the advice of physicians who recognized their daughter needed specialized care that could only be found in the West. While playing with her younger brother when she was 6 years old, she discharged a static electrical shock into him that stopped his heart and resulted in his death. From that point on, her parents realized they had no alternative but to send her away.

Inaccurately diagnosed with epilepsy as a small child, Jintana spent most of her life in the care of Dr. Morris’ team when all other medical options and diagnoses failed. When she turned 16, an Enfeld Bionomics employee visiting her at Dr. Morris’ facility was killed when he was working with her. While the findings did not prove guilt on her part, she was deemed a risk to herself and others.

Exceptional Ability: Extreme polarization of cell membranes causing her to generate a bioelectrical field (and even sparks) that must be externally depolarized (i.e., externally grounded).

At all times, Jintana carries with her a grounding pole that doubles as a cane to help her walk when she has difficulty. Jintana’s cells generate a significant hyperpolarized electrical potential which will discharge from her body to objects around her if she doesn’t take precautions to ground herself. Based on a brief consultation with medical staff from Enfeld Bionomics, she has learned that she has some control over the direction and intensity of charge flow in and from her body. Depending on her electrolyte levels at the time of hyperpolarization, were she to touch someone or they to touch her, the shock can be anywhere between mildly painful to life-threatening. Researchers and doctors working with her have often commented that they can feel a tingling sensation that emanates from a bioelectrical field that surrounds her from time to time.

Jintana has a fatalistic outlook on life which could be construed as very cynical or negative. Doctors she has seen have always been candid about the effects of her condition: neurodegeneration and damage to her nervous system. She is aware that her condition is life-threatening and her life-span probably short. She has grown physically more frail over time. Yet she is very concerned for the well-being of others and an extremely ethical, caring person. Her inability to have physical contact with other people has caused her to withdraw from most relationships. That is, until she meets Vivienne Hayley, and, while they immediately have personality conflicts, she and Vivienne learn that Vivienne may well be the one person on Earth who Jintana can touch without hurting.

Patient E-P-022 (Jintana Visalyaputra) has a rare if not unique condition of extreme hyperpolarization of her cell membranes and the necessity to externally depolarize herself to return to a cellular resting state. She must also take almost daily injections of electrolytes and copper supplements. The dosage of copper required to sustain her is often 100 to 500 times the normal human daily requirement and a dosage that would prove toxic to everyone else.

The patient was in our care from just after age 8 until age 20 when she was placed in her own home that was specially built to house her. Prior to determining the nature of her physiology (we discovered her unique metabolic condition at age 8), she spent the entirety of her youth having frequent seizures that were misdiagnosed as epilepsy, then Menkes disease. Between her seventh birthday until we stabilized her condition shortly after she turned 8, she suffered a prolonged, continuous seizure for over one year.