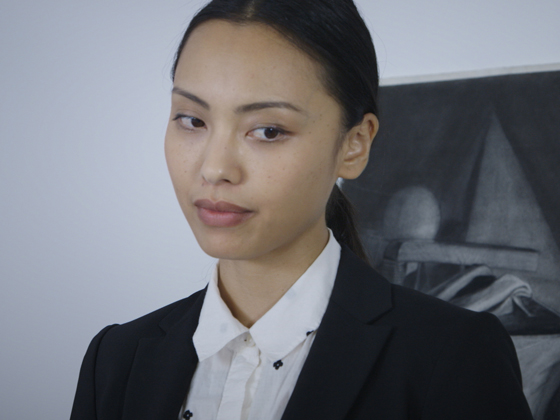 An Olympic gold medalist in gymnastics and martial arts as a child, Rachel LaTour is physically exceptional. Now using her talents as a CIA agent who leads high-risk missions in China, Rachel is conscientious, honorable, and patriotic. But when she learns that telepathy is real and she can detect Jean using it on her, her world view is altered. The closer she comes to the truth, the harder it is for her to reconcile her new beliefs with her sense of loyalty to the U.S. government.

Rachel’s parents moved to the U.S. from Taiwan and became naturalized citizens. Her father died when she was 2 years old and her mother later remarried to Arnold LaTour. Rachel was ultimately adopted by her step-father and became very close with him, though was somewhat distant from her mother. Her adopted father encouraged her athletic and academic pursuits and Rachel bloomed. Her step-father eventually died when Rachel was 17 which deeply affected her, though she channeled her grief into her studies becoming even more focused.

Driven by both physical and mental pursuits, the over-achieving and very serious Rachel LaTour would seem to anyone to be exceptional. Her physical ability allowed her to achieve fame in the Olympic arena, in both gymnastics and the martial arts, beginning at age 12, and her educational pursuits have been rewarded with a Bachelor’s degree in criminology prior to age 15 then graduating from the United States Military Academy at West Point at 19. She has been called a child prodigy because of her level of motivation even from a very young age, but what she has in drive, she lacks in social knowledge and she is frequently isolated from others in her age group and generally from everybody else due to her lack of interest in typical young adult pursuits. Rachel has a strong ethical nature and a belief in justice.

She was recruited by the Army’s special mission unit, Delta Force, and trained in covert work. The CIA was impressed by her physical and academic credentials, but also saw in her a maturity beyond her years. They recruited her into their Special Operations Group and found that she could be useful in more subtle operations. The CIA realized that Rachel’s high profile and name recognition, rather than being a detriment, allowed her to make contact with and gain the confidence of others in many places in the world where she is required to work.

By age 22, Rachel established herself as the leader of a covert group of special operatives trained in infiltration and extraction. Her colleagues refer to her by her code name, Blackbird, which her supervisor applied to her upon seeing her “fly” into action and demonstrating unusual athleticism during training exercises. She prefers to be called Rachel.

When she has been involved in romantic situations, they often turn out to be problematic for her work. She had difficulty integrating a social life into her work life, until she became involved with her co-worker Michael DeCosta. This was, seemingly a good solution for her since she is at work or traveling regularly, but this created a new, and ethical, problem for her and him.

Now, during a mission to extract a defector from China, she finds out that telepathy — mind-reading — is real and learns that she can tell when someone is reading her mind. She is understandably shocked by this news. When she attempts to report this back to her superiors, she feels Dr. Jean Speerel attempting to read her mind. What is going on here? She isn’t one to jump to wild conclusions, but she wonders: is there a conspiracy in the U.S. government?

Daniel shared with me his recent meeting with Rachel LaTour. I’ve written extensively about those, like Rachel, who have heightened physical abilities and who are the top athletes in the world. She is a multiple Olympic gold medalist, the youngest gold medalist, and a two discipline medalist, which puts her into a unique category even for Olympic gold medalists. Physical prowess of hers is unusual, but most exceptionals have physical abilities rather than mental abilities, and those physical exceptionals who go into the high profile realm of competitive sports often achieve success and fame.

As to the issue of her awareness that her mind is being read, also known as telepathic sensitivity, those of us who work with telepaths tend to develop a similar trait — we can feel when one of them attempts to get into our heads. But it usually requires long-term exposure to telepathy before this ability manifests. In Rachel’s case, because it was so sudden, with no past history of encountering telepaths, it’s very likely she herself is pre-telepathic (meaning she has a genetic predisposition to telepathy) or she is a latent or very low rank telepath. It’s worth further study.