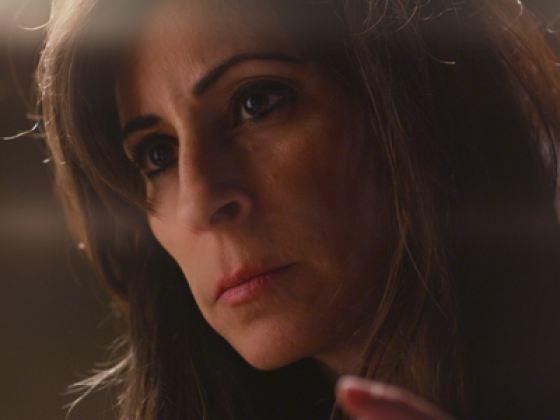 Radha is a survivor. When her father married her off to an organized crime family in Pakistan at age 14, it was only the beginning of a life full of violence and betrayal. Now the leader of the organization, she is hardened, scrappy, strategic and ruthless. When she learns about her father’s vision of her impending death, she must find a way to sidestep her fate. Her plan is to obtain exceptionals to help her, whether they’re willing to or not. But little does she know, the process of stepping out of her father’s shadow will shed new light on a power she never knew she had.

Exceptional Ability: Latent telepathy and long-term exposure to telepathic contact. She has the ability to know when she is being telepathically observed, also known as telepathic sensitivity. Although currently unknown to her, she also has a low rank form of telepathy.

The daughter of Sandesh and his first wife, Marie, Radha was born in the United States, but was raised primarily in India. It was around the time of her birth that Sandesh realized he had precognitive telepathy. Her mother died when Radha was very young, and after Marie died, Sandesh was a father in name only — he was absent for most of her childhood and she was raised by aunts and cousins.

During her childhood, her father’s business became more profitable — the business was basically money lending, first to gamblers, then to criminals, and finally to terrorist organizations or any group that needed large amounts of undocumented funds and who had the ability to pay them back. From this business, her father did invest large amounts of money into legitimate businesses, but unstable financial markets in Asia made criminal money-lending more profitable than legitimate investments.

In an effort to grow his organization into the lucrative arms trade in Pakistan, Sandesh agreed to marry Radha to the 28 year old Kabir Yasser, one of the sons and likely heir to the Yasser family, the biggest crime family in Pakistan at the time. To do so, Radha had to convert to Islam, both to appease the Yasser family and to circumvent the marriage age laws in India, since she had just turned 15. Radha wanted neither a husband nor to be a Muslim, but her father would hear none of it. She was married quickly and sent off to Pakistan with her new husband.

Her life with Kabir turned very violent, very quickly. He was a sadist and would take great joy in sexually and emotionally abusing his young bride. Her only solace came when he had trips away from home, and she often prayed to whatever gods who would listen that he wouldn’t return. Unfortunately, he always did return, and he seemed to have a new, twisted desire to share with Radha. Her relatives were less than sympathetic — many of them had similar marital stories or they would say “poor spoiled girl, never satisfied with anything.”

When she was 20 years old, she and Kabir learned from doctors that she was unable to have children, and it may have been related to abuse she suffered at his hands. After hearing this news, he beat her senseless that night, but secretly she was glad to disappoint him. After that, he also lost interest in her sexually, and she was very happy for that as well.

When Kabir’s father died, Kabir took over the family organization, but he soon proved to be an incompetent and lazy manager. He enjoyed being a working thug for the family, but was ill suited to do any of the planning or deal-making. It was Radha that filled this void, and she quickly established herself as the de facto leader of the family and gained the loyalty of her in-laws, in particular Fahad, Kabir’s younger brother and a competent and loyal right-hand person for Radha. When her father’s organization was much more sizable than that of the Yasser’s, she orchestrated a more direct merger of the two, rather than just a working relationship. Kabir was enraged that she would do this behind his back and he violently confronted her. This time, she was prepared, and she walked away leaving him to die from multiple stab wounds.

After Kabir’s death, her relationship with her father improved and she effectively became her father’s most trusted ally. But three things would change all that. First, Radha was growing tired of her father “watching” her in visions. She could feel it and she perceived it as not only a violation of her privacy, but also an indication he didn’t trust her, and he didn’t. Second, he learned he had cancer and after consulting with Dr. Morris, his outlook changed. He became more spiritual and decided the family business should change directions. Finally, since she was a child, Sandesh saw a future where he learned of her death. This basically meant his visions of her “turned to black” or appeared as a void which was an indication the target of the telepathy was dead. As that future got closer, his visions indicated more clearly that he apparently had a hand in her death. He reasoned that they must have had a falling out, and once he started to believe that, it eventually happened. They did have a falling out over the direction of the family business, and Sandesh’s desire to shed the unlawful pursuits of the business, which meant most everything Radha was involved in. Independently, both she and he split their business, and she willingly took the criminal aspects of the enterprise.

10 months ago, Radha became aware, through a mutual and trusted family member, that Sandesh had visions of killing her (or in some way being responsible for her death). She knew his visions always came to pass, but that the context may be unclear. She had one year before the incident, so she decided to formulate a contingency plan. But how to outwit a telepath who can spy on you from anywhere, and from the past?

Her desire to protect herself from her father grew into an obsession, but she knew she could not write anything down or verbalize the plan in any way — he might use his power to see what she is doing, then stop her. She came up with a plan: she would permanently block his ability to “see” her with his visions. That would give lead him to believe she was dead.

This plan was complicated — even if she could find a means to block his clairvoyance, she had no good means of testing it or even implementing it. More problematically, her fixation with this desire to protect herself lead her to lose track of her business colleagues and other members of her organization.

While in Germany, she visited a bookstore — she reads a lot, and knows a lot of languages, so she had many books to choose from. She enjoyed non-fiction, particularly philosophy and new age books, and one caught her eye. She couldn’t believe her luck. A book that provided her one third of the solution to her problem: Future Certain.

The second third of the solution to her problem presented itself from a series of expensive bribes made by a trusted colleague and several trips he would make that ended in Myanmar.

The final third of the solution came in the form of her cousin, Dariya, who provided Radha with more information about how her death might occur.

Her contingency plan now in place, she has only to find Brynne Harris in India to set the plan in motion. Unfortunately, she can’t see the future, and it is far from certain what the outcome will be.

We’ve started to see a correlation: predisposition to telepathy is inherited. This is the case with Sandesh’s five-year old daughter Radha. She has the tell-tale brain waves associated with a very low power rank telepathic ability. Her father has strongly indicated he doesn’t want her told about this — he realizes that along with this trait comes the tumor that seems to worsen the more the ability is used. He’d rather her not be aware of it and besides, she’s likely to never know about it because it’s not prominent — most people who have low power rank, intermittent telepathy are never aware of it.