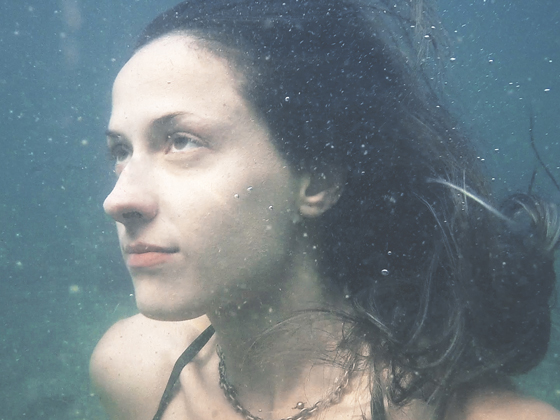 Vivienne is a drifter, a grifter, and a bigot. And she’s fresh out of prison. A physical exceptional, her skin and cells rapidly die and regrow, allowing her to breathe underwater and regenerate wounds faster than a normal person. But as a former patient of Dr. Morris, she knows her ability is also a disease. She will likely not live past 35; and with a lack of ethics, a lack of maturity, and a very high pain threshold, Vivienne just lives for the day. It’s when she ends up saving another exceptional’s life that she finds meaning in her own and is inspired to become a literal superhero.

Exceptional Ability: Accelerated viscera neoplasia (rapid and abnormal cell growth and replacement). She can both breathe underwater and regenerate cellular damage at a faster than normal human rate.

Vivienne always knew she was different, but saw her abilities as more of a parlor trick rather than anything useful. Her skin rapidly regenerates and is permeable ensuring that any tattoos put on her are always temporary. To make money or get free drinks in a bar, she’ll use her skills to impress the patrons or win bets. She never once considered herself special or extraordinary.

Born in Cooperstown, North Dakota, her mother disappeared when she was a baby and her father moved to Grand Forks, North Dakota where she grew up. At one time her father told Vivienne that her mother was a tramp and just ran off, while another time he said her mother was dead. She never knew what the truth was and her father wasn’t much for words or the truth. Her father and her rarely got along. When young, she learned that she could stay underwater, without breathing through her lungs, for very long periods of time. She scared a neighbor girl and that girl’s mother when she pretended she drowned. Mostly, she kept this ability a secret. It was the way she’d be able to run off and hide when her home life was too difficult — she’d immerse herself in a deep pond or river and wait until trouble passed her by. She liked the way it was quiet and still underwater.

At 13, her father and her were having a particularly heated argument while he was driving. Distracted by the shouting match, her father lost control of the car and it upended on a highway at high speed, throwing him away from the vehicle and leaving Vivienne trapped inside as the interior of the car caught on fire. Soon she was engulfed in flames and lost consciousness. She woke up from a coma in a medical facility a week later and was told her father was dead and that she was under the care of Dr. Morris. While most of her hair was burned away, she had no other visible signs of burns. Without parents or available (or known) relatives, her custody fell to the state, or in this case, Dr. Morris’ research team. The research staff found her to be a very disagreeable and difficult patient. She was argumentative, ignored her tutors, and got into fights with other patients and employees at the facility. Just prior to her transfer to Enfeld Bionomics before her 17th birthday, she escaped. She hid in a nearby reservoir for a day then walked away.

Although she is still anxious around fire, there’s very little that causes her to be afraid. Vivienne has an extremely high pain threshold. When you add to her high pain tolerance a faster than normal regeneration rate, you get a person who’s not bothered by concerns about getting physically injured. She’s also a very physically capable and physically secure person. She’s comfortable with her physicality — she likes her body, and she’s a bit of an exhibitionist. She likes how men look at her and she is attractive, although she’s definitely a diamond in the rough — very rough.

While she lacks a sense of fear, she also often lacks good judgment. She’s emotionally very reactive — quick to anger, quick to get defensive, quick to get emotionally hurt, and slow to trust anyone. She’d rather manipulate people than try to build trust, particularly men. She finds it very hard to make and keep friends or even keep a job. Though she doesn’t see herself as different because of her ability, her lack of trust in people does set her apart. It takes a very patient person to get close to her.

Vivienne is prone to using her fists — and teeth — to resolve an argument. That, coupled with writing several bad checks, landed her in prison a few different times, with the last stay being for six years.

Now, after spending the last several years in the Pocatello Women’s Correctional Center in Pocatello, Idaho, she has been paroled and is eager to drift away.

All humans have minimal respiration through their epidermis. Patient E-P-037 (Vivienne Hayley) has an extremely rare condition that allows her to take in atmospheric oxygen through her epidermis at a rate that is significant to total respiration. When the patient has no respiration through her lungs, her dermal cells enter a state of rapid accelerated functional hyperaemia and oxygen transfer and its not just dermal cells that allow this, but all viscera cells. When submersed in liquid, her viscera cells allow the transfer of oxygen from the liquid to her respiratory system. During this process, she undergoes rapid cellular damage and loss which is offset by rapid regeneration.

Overall, her viscera cells regenerate more rapidly when she is injured and exhibit a lack of apparent fibrosis after thermal, chemical or mechanical tissue damage. Colleagues have commented that her viscera cells have many of the same properties and features of malignant cancer cells.

It should be noted that the patient has a dormant immunosuppression caused by atypical mTOR inhibitor production. This will likely change in her early adulthood and the probability of immunodeficiency is extremely high.