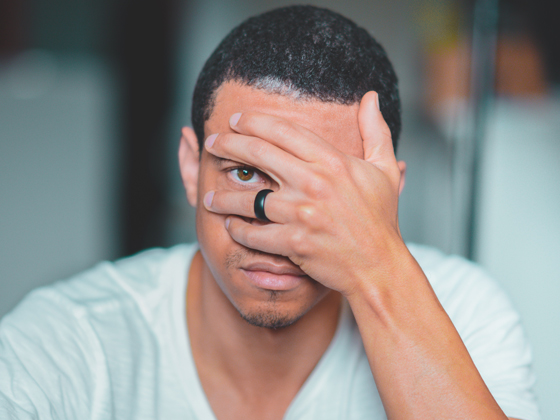 Exceptional Ability: Distal (long-range) telepathy. This is an observation rather than communication form of telepathy, which is why it may more accurately be called clairvoyance.

When he was a child growing up in Phoenix, Arizona, Wilson believed he was destined to do great things. And his mother reinforced this belief by encouraging him to dream big. She doted on her only child. Unfortunately, Wilson never had a direction for his dreams or a clear goal. He usually knew what he didn’t want to do rather than what he wanted to do. He was always looking for the shortcut rather than setting a realistic goal then working toward it. He also had to fight against pervasive depression which was very prevalent in his family.

In high school, his life took a dramatic turn. He was socially awkward, as most high schoolers tend to be, and, again as many high schoolers do, attempted to join in with a group to try to fit in and find himself. He fell in with the school stoners. Already an average student, his grades fell as the quantity of drugs he used increased.

One night during his junior year in high school, while he was under the influence of a combination of marijuana, vicodin, and amphetamines, he had an unusual dream. He was suddenly “in the head of” a classmate — Angie, a girl with whom he was acquainted and attracted to. He could see what she was seeing and hear what she was saying. He woke up the next morning with a severe migraine-related headache and couldn’t get out of bed. He continued to experiment with drugs and lucid dreaming and found he could concentrate and choose to whom he could see through. Soon, he could view people without drugs, just by controlled dreaming. Wilson’s obsession with Angie in particular caused him to attempt to sleep often to follow her in his dreams, which caused him to have almost continuous migraines, which caused him to use pain relievers more often. Until he ran out.

The migraines, and the lack of sufficient medical care to address the symptoms, caused him to miss a great deal of school. His parents became concerned and he did not tell them what caused the migraines, only that they had just started and that they seemed to become more frequent. His parents took Wilson to a doctor, who referred him to specialists. After doing brain scans, they discovered a small tumor on the occipital lobe of his brain. They attempted to treat it with conventional methods — radiation in this case — without success. One of the specialists recognized this type of rare tumor as something that Dr. Morris had been working with, so referred Wilson to him.

Dr. Morris immediately began his consultation by asking Wilson if his migraines were associated with unusual visions. Wilson was surprised — he was not aware anyone would know about his ability or that anyone else might have this power. At first Wilson was not forthright about his power, but then relented when Dr. Morris told Wilson that he could sense something from Wilson. Wilson then told Dr. Morris everything he knew. Dr. Morris didn’t tell Wilson about his other patients with similar powers, only that other people who had these abilities did exist.

Wilson stayed at Dr. Morris’ facility for a few weeks so tests could be run on him and he could learn some ways to better control his ability. In that time, curiosity got the better of him and he decided to “watch” Dr. Morris. It was very eye-opening. Wilson saw other patients and their records — people with all sorts of odd abilities, including others like him. For the next few days, and with a seemingly endless supply of prescription pain-killers, Wilson began viewing others who had this strange power. More surprisingly, he could view people who the telepaths were viewing to create a kind of strange telepathic leap frog. He was enjoying this new sight and all the potential it held. And then he came across Kamal.

Although he was only linked to Kamal briefly, Wilson received an overwhelming rush of sights and attempts to contact his mind. He woke up a week later from a coma and the realization that his ability was lost. Unfortunately, he still had a tumor and migraine-related headaches to go along with it.

Wilson was released from Dr. Morris’ medical facility with plans to return annually to check on his tumor. Devastated by the loss of his ability, Wilson found little of interest at home and at school. At the beginning of his senior year and shortly after turning 18, Wilson dropped out of high school. Much to the dismay of his parents, who he never told about his ability and subsequent loss of it, Wilson left home to stay with friends.

In and out of low wage service jobs, Wilson supplemented his income with petty theft to help support his drug habit, which became an effective way for him to cope with losing his ability and losing any sense of uniqueness or goals he may have had. He began to experiment with stronger drugs and became hooked on and off of methamphetamines, pain-killers, you name it. He started dealing drugs and found he was pretty good at this.

Years went by this way. He grew apart from his family and lost touch with Dr. Morris. Depression set in. One day, he looked around himself, his dingy studio apartment, and realized he had nothing. A high school yearbook when he was a junior reminded him of his friends and the realization that they are no longer in his life. He had no friends now. Nobody would miss him if he was gone. So, he decided it would be a good day to take a larger dose than normal. He swallowed a bottle of pills and went to sleep. If it hadn’t been for a candle left burning that set off a smoke detector, causing the neighbors to complain to management, who entered his apartment, Wilson would be dead.

Wilson was standing below what appeared to be a building or a column. It was shimmering blue. The black ground was moving and shaking. The sky was dark around him and it was as though he was in a great rocky desert. It was just him and this thing, this column or whatever it was. And it seemed to be expanding and getting taller. It was going to crush him or, it was crazy he knew, but it was like it was trying to absorb him. Wilson began screaming and wakes up shaking and convulsing. He’s in a hospital bed. He has just been revived from an overdose and is being treated.

The doctors ask him about his medical history. He tells them he was a patient of Dr. Morris, who they cannot locate. Then he mentions Dr. Trent and they are able to talk with Dr. Trent. Dr. Trent calls Wilson and Wilson has some exciting news to share with him — his ability appears to have returned! Unfortunately, those nightmares seem to have come with it. They are recurring and very disturbing.

Patient E-M-017 (Wilson Childs) has concurrent, distal (long-range), occipital and temporal, delta wave-based telepathy. He can see and hear what other people are seeing and hearing in present time while he’s sleeping. Doing this causes him intense migraines, which he treats with both prescription and illegal drugs.

He has a Morris telepathic power rank value of medium.

Update by Dr. Trent: Wilson has been treated multiple times for drug use and once for attempted suicide. At one time, he appeared to lose his telepathic ability, but now suddenly it has resurfaced along with disturbing dreams.